Everything you need to know about Ampleforth, a DeFi protocol with a rebase coin.
Learn

What is Ampleforth? A Guide to How Ampleforth Works

Ampleforth is another DeFi protocol that has gained a lot of popularity lately. It’s so popular that the system had struggled to keep its token’s value stable due to high demand. Some news outlets have even called it the next big thing in DeFi.

Here at Crypto Skillset, however, we don’t like to blow things out of proportion. We like to explain things as they are.

And Ampleforth indeed has a very appealing design to it. It has an elastic supply, meaning the system adjusts it accordingly to maintain its stability.

Some may argue that it’s a lot better than the stablecoin platforms that are currently available in crypto. However, it does have one red flag, in which you’ll find out later in the article.

Ampleforth was conceived by engineer Evan Kuo, who happens to be the former CEO of Pythagoras Pizza. His pizzeria was actually the first to tokenize its franchise.

Early on, Kuo realized that cryptocurrency is an attempt to reinvent money and banking. He also recognized that money was a lot easier to work with. Later on, he founded the Ampleforth Foundation, funded by Pantera Capital, Huobi, and Coinbase CEO Brian Armstrong.

Ampleforth was also able to raise nearly $10 million in three public offerings: two ICOs and one IEO that took place on Bitfinex.

Ampleforth is a cryptocurrency and DeFi protocol that has an adaptive money supply maintained by a smart contract. In other words, its supply adjusts regularly to match demand.

When demand goes up, the system prints more tokens. When the demand goes down, it reduces the token supply. As a consequence, the value balances out to $1.

The ultimate goal of the Ampleforth protocol is to one day let AMPL become the world currency. The founder believes that the project is essentially reinventing the way money works. In the next sections, you’ll find out why.

The economics of Ampleforth has been designed after a study of the history of the U.S. dollar.

Once there was a time when each dollar was backed by gold stored in government vaults. Before the world war, it worked well enough. Gold is a great store of value, after all.

However, it also has its own disadvantages. It doesn’t have a flexible supply, for one. And the gold standard runs the risk of hyperdeflation.

Some might say “but hyperdeflation is good. Like what happened to Bitcoin. It moons,’ but no, it’s not a positive event.

It would have severe economic repercussions. If hyperdeflation were to happen, everyone would stop buying and spending since they know they could buy more with the same amount the next day. And the day after that.

And if this consumer attitude carries on for extended periods of time, the result would be catastrophic. In fact, international trade would stagnate and the economy would come to a halt. This is the primary reason why the U.S. left the gold standard in 1971.

After World War II, the international demand for the U.S. dollar skyrocketed. Since the rate of mining gold is slow (which is what makes it a great store of value), hyperdeflation became a threat to the economy.

And that’s how the U.S government transitioned into a fiat U.S. dollar, a currency backed not by gold, but trust. They did so they could print more money to keep up with demand.

We all know how that turned out.

The fiat currency we know today has two main weaknesses. One, the supply can only be inflated but not deflated. After all, the government can only print more dollars, but not recall what they’ve distributed.

And above all, the money printing press is controlled by humans, beings that are subject to greed and corruption.

How Ampleforth Solves It

So as stated above, fiat and gold-backed currencies have their own strengths and weaknesses by themselves. What Ampleforth aims to do is combine their strengths and eliminate their weaknesses.

The protocol has the same value preservation attributes as gold since the smart contract moves it toward a stable value. It also enhances the capabilities of fiat currencies by enabling deflation mechanisms on top of inflation mechanisms.

It’s important to note that these mechanisms are only there to keep the value stable. The founders have no plans to implement yearly inflation.

The circulating supply of Ampleforth is adjusted every 1pm EST daily to match demand. And this is done automatically via a smart contract.

The smart contract uses Chainlink oracles alongside the Ampleforth oracle, which Chainlink helped build), to feed data to the system. The price feeds are taken from exchanges Bitfinex and KuCoin to ensure that the price remains in the equilibrium range.

This process is called a “rebase”.

Imagine that you have 3 AMPL in your wallet worth $3 USD then the demand for the token suddenly rises. Let’s say the demand pushes the value of each AMPL to $2. What’s gonna happen is that the smart contract will adjust the supply accordingly.

Therefore, your wallet will now have 6 AMPL instead of 3. And they would be worth $6 in total. This creates an arbitrage opportunity for you if you choose to sell your excess AMPL.

This gives arbitrage traders the chance to make a profit at the same time put downward pressure on the price until it hits the equilibrium range.

AMPL is the native asset of the Ampleforth protocol. It is a semi-stable cryptocurrency that has an elastic supply. Its supply expands and contracts depending on market demand.

In a sense, Ampleforth functions similarly to stablecoins. However, it is not backed by fiat or crypto assets. Furthermore, it’s not as stable as a typical stablecoin either.

As you can see from the chart, the Ampleforth protocol has struggled to maintain the value of AMPL. If you look at the price chart for stablecoins like USDT and DAI, the value of each token has mostly stayed within the $0.99-$1.01 region.

The main difference between AMPL and stablecoins is that AMPL only reduces volatility as opposed to eliminating it.

An important thing to note is that AMPL is tied to the 2019 value of the dollar, not USD’s current valuation. As you know, the U.S. dollar is subject to inflation, which defeats the purpose of the protocol. Therefore, the cryptocurrency has decoupled itself from the U.S. economy.

This basically means that the value of each AMPL will increase in comparison to USD over time. And this partly explains why 1 AMPL is no longer worth $1 today.

The token’s ultimate purpose is to eventually become the dominant international currency. It has a lot of the characteristics of sound economics so why not?

The problem is, it has the same goal as Bitcoin, XRP, and perhaps some national currencies. A very competitive endeavor indeed. Should the cryptocurrency succeed in this, it would take a long time.

AMPL is a great store of value due to its stability mechanism in place. In fact, it may actually be better than stablecoins as we know today.

Due to its elastic nature, AMPL is a great collateral for DeFi lending platforms like Uniswap and Compound.

Arbitrage is not only a use case, but is also one of the elements that keep the AMPL stable after a rebase. If you’re confused, go back to the “User point of view” section. During a rebase, the Ampleforth protocol either distributes or recalls AMPLs, adjusting the supply.

Before a supply is reduced by the system, arbitrage traders can sell their excess AMPL and make a profit.

But if the opposite happens and supply needs to be increased, they can buy more AMPL to increase their holdings and sell them after the rebase. By then, their funds will have doubled if they move quickly enough.

Ampleforth Geyser is a smart contract faucet that allows liquidity providers to earn AMPL by supplying Uniswap with AMPL. It is created in collaboration with Uniswap.

The larger the amount deposited and the longer they are kept in Uniswap, the higher the reward. 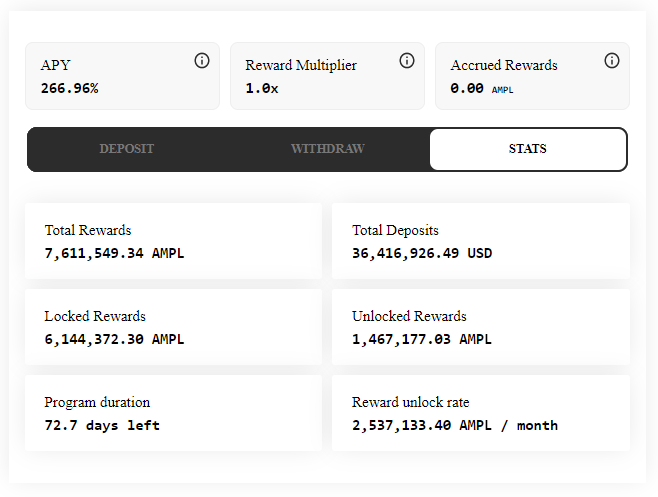 One function allows them to pause any changes in supply and the other to freeze all user funds. That is a big red flag among hardcore cryptocurrency supporters.

I don’t know when the team plans to give up that capability but they better do. Sooner rather than later. Not only does it drastically reduce user confidence in the system but also makes them a target for government intervention.

As viewed from its price chart, AMPL still exhibits high volatility relative to stablecoins. We can let a 10-20% price swing slide every once in a while, but 400%? That’s a bit too much for a currency that’s supposed to function as digital cash.

One of the things it could do better is with the frequency of the rebase. It currently adjusts the supply once a day. Why not make it four or more times a day?

It would likely help address the volatility problems.

Ampleforth is a very promising DeFi protocol as it has basically introduced a novel way of designing an economy. It would have been perfect if it weren’t for the centralized aspect.

Still, we have enough reason to believe that it is highly unlikely that the founders who hold the keys to the system would do anything to harm the Ampleforth or its users. I still hope that they give up the keys soon.

With a market cap of $390 million, the project has a lot of room to grow. Can it compete with Bitcoin, XRP, XLM, a gazillion of CBDCs? Honestly, that’s a long shot.

But it might have a place in the future of finance and crypto.